Getting Support from TMC is easy. If you need instant support please use: Live Support. Or Just Click the button below to open a support ticket..

To get online commercial information go to Customer Resources website, You will find most of the information you may need: Commercial Section For Commercial Help.

The History of IECP
It is really fascinating and hard to believe that external counter pulsation (ECP) was being performed as early as the 12th Century in Ancient India, and nowadays with high technology equipment. The only difference was that in fact it was an early form of Yogi, which was actioned by mire contraction of the abdominal muscles and nowadays is known as Kapalbhati.

We will try and find out more about Kapalbhati and what the claims are?

POLICY/CRITERIA
Effects of Kapalbhati are considered investigational for the treatment of all conditions, including but not limited to diabetes mellitus and erectile dysfunction.

POSITION SUMMARY
The evidence is not sufficient to permit conclusions about the benefits of Kapalbhati as a treatment for any condition.
It is uncertain whether true Kapalbhati offers any additional effectiveness as the standard treatment options in yoga currently available to patients with diabetes mellitus and erectile dysfunction.

No definite clinical findings are available about the above benefits and no trials were ever carried out in the world to justify the above claims. Today though millions of people are doing just this and claiming benefits. In 2006 we started studying the benefits of this Yoga exercise and how it could have possible benefits with diabetes mellitus.

We started studying randomly the effectiveness of this exercise on patients with type-1 and type-2 diabetes. The exercise was carried out 2 times every morning and evening on an empty stomach. The blood sugar levels of all the patients came down by an average of 40 points in 10 days.

At the end of three months trial period it was found that the sugar levels remained controlled but this was due to the exercise associated with the process and most of the patients had lost between 3 to 5 kgs in weight. This was not a cure to diabetes mellitus as was claimed, but the patients claimed of being much more active and energetic.

Subsequent analysis of the participants demonstrated statistically significant changes of both their exercise duration and peak oxygen consumption. Could this have some effect on the cardiac insufficiency patients? So with this in mind a group of five patients were taken who were aged between 50 and 60 years old with the same exercise protocol. The EF of patients that was initially 35 to 40 rose by 40 to 50 in three months, and the patients were far more active. The study, which was initially meant to study diabetes mellitus was slowly drifting towards cardiac insufficiency benefits, so therefore we decided to move our work further.

To decrease the obstruction patients were attached to the cardiac monitor and were asked to contract during the beep of the monitor, this gave a perfect waveform but it was very difficult maintaining the rhythm. We were advised of a similar study for refractory angina, which was called the ECP or the External Counter Pulsation. This did not meet our requirements, as unlike the contraction of the abdominal muscle rectus abdominus, which took 200 to 250 milliseconds, we found the ECP took almost 500 milliseconds in the diastolic phase. This was way beyond the requirement of our study and also no randomised controlled trials examined the effects of ECP in the treatment of refractory angina.

Only one randomised controlled trial examined the effects of ECP in the treatment of CHF. The Prospective Evaluation of External Counterpulsation in Congestive Heart Failure (PEECH) study randomised 187 patients with mild or moderate heart failure to receive either ECP treatment in addition to optimal pharmacotherapy, or pharmacotherapy alone.

The situation wanted something that could complete the contraction in a minimum of 200 to 250 milliseconds. The search for this need began and we took it upon ourselves to design such a piece of equipment that met these needs. 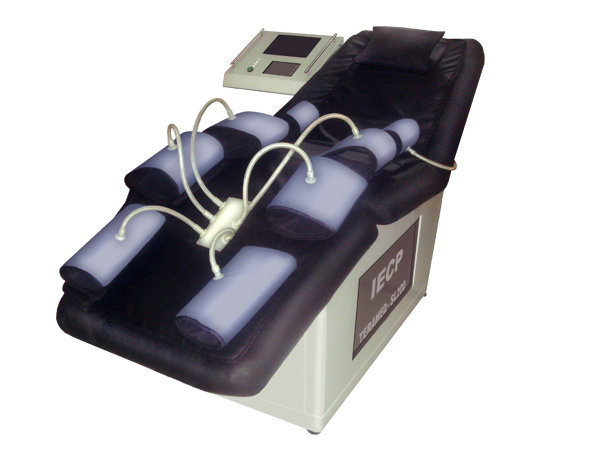 If you are a cardiac insufficiency patient we would advice you not to do Kapalbhati without a doctors presence or advise. The above may not be considered as a medical advise. Your doctor is the best judge of your condition.Consult your doctor.

We have an exclusive area for dealers. Some basic facilities are listed below for your information.


It is well recognized that the excesses and stresses of the modern day world that are taking, an ever-increasing effect on peoples long term health and wellbeing. So the combination of being able to use knowledge and awareness and also work with innovative products within the Health and Wellbeing Industry is a perfect match for what is being manufactured and being promoted by us at TMC Europa Ltd.

Sergei Nunuparov is a Ukrainian Citizen who has worked in the Healthcare and Wellbeing Industry for over 20 years and during that time has both travelled and lived in many countries throughout the world. During which time he has gained a wealth of knowledge about people and the lifestyles that they live and always liked to be at the cutting edge of the Industry.

It is our intention to make Hospitals and people alike aware that by using the cutting edge Medical Devises that are available now, that there are now options to look at choices of none evasive surgery, where there are time savings, monetary saving but more so than anything else the opportunity of improving personal lifestyle too.

We will be always looking at further products and equipment that can only enhance the range of equipment that we are currently supplying. Through education we strongly believe that results can be lasting and allow people to live a longer, healthier and happier lifestyle. We intend making the people that matter know that we are here to lend them the support and knowledge to genuinely help everybody.

If you want to send me a message please Click-here...

Want to reduce prices ? Well.. you may not require all the facilities available in TMC Equipment you propose to buy..

Note: Though we do not reccomend you to reduce the facilities available as standard.But we are still willing to go ahead with your desire. .

TMC Europa Ltd. has a dedicated Customer Support section for Product Support, You can register with us at the help-desk by clicking here.... If you need live support from one of our web executives please click the link below to take you there. The availability of live support is subjected to the time at the workplace of TMC.