(1) A Shockwave Generator
(2) A Focusing System
(3) A Coupling Mechanism
(4) An Imaging/Localization Unit.

Shockwaves are generated using electrohydraulic principal, this is the original method of shockwave generation, electrohydraulic, means that the shockwave is produced via spark-gap technology. In an electrohydraulic generator, a high-voltage electrical current passes across a spark-gap electrode located within a water-filled reflector. The discharge of energy produces a vaporization bubble, which expands and immediately collapses, thus generating a high-energy pressure wave.

The focusing system is used to direct the generator-produced shockwaves at a focal volume in a synchronous fashion. The basic geometric principle used in most lithotripters is that of an ellipse. But in lithotripters manufactured by TMC Europa Ltd., a further advanced geometry of dual focus ellipso- paraboloid is used. Shockwaves are created at one focal point (F1) and converge at the second focal point (F2). The target zone, or blast path, is the 3-dimensional area at F2, where the shockwaves are concentrated and fragmentation occurs. 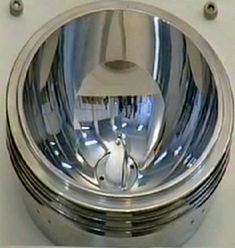 In the propagation and transmission of a wave, energy is lost at interfaces with differing densities. As such, a coupling system is needed to minimize the dissipation of energy of a shockwave as it traverses the skin surface. The usual medium used is water, as this has a density similar to that of soft tissue and is readily available. In TMC ESWL systems a small water-filled cushion with a silicone membrane fitted in front is used to provide coupling between the shockwave head and the patient. A small amount of Ultrasound Gel or Silicone Oil is used to provide air-free contact.

Imaging systems are used to localize the stone and to direct the shockwaves onto the calculus, as well as to track the progress of treatment and to make alterations as the stone fragments. Fluoroscopy, which is familiar to most urologists, involves ionizing radiation to visualize calculi. 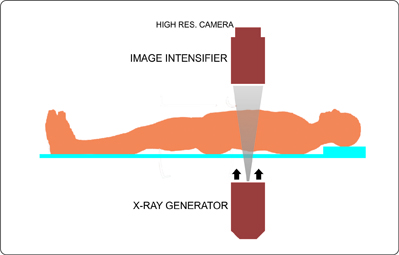 As such, fluoroscopy is excellent for detecting and tracking calcified and otherwise radio-opaque stones, both in the kidney and the ureter. Conversely, it is usually poor for localizing radiolucent stones (e.g., uric acid stones). To compensate for this shortcoming, intravenous contrast can be introduced or (more commonly) cannulation of the ureter with a catheter and retrograde instillation of contrast (i.e. retrograde pyelography) can be performed.

TMC dealers work to the best of their abilities to assist you in training and timely servicing your operation's productivity while minimizing operating costs. Thus giving you a maximum uptime of your facility. This helps you keep your business ahead of the competition, and to keep you excited about the quality products TMC Europa Ltd provides.

Gallstones form in the gallbladder, they can be as small as a grain of sand or as big as a golf ball. Gallstones are hard, pebble-like deposits most commonly made of cholesterol or else made of bilirubin.

Gallbladder stones does not have alternative treatment options other than surgery. ESWL or lithotripsy procedure is rarely performed on gallstones, it is sometimes used on patients having chronic cholecystitis (inflammation of gall bladder) or who are not strong enough or fit for surgical procedure.